The Nexus Q was such a misguided product that Google decided to pull the plug before the device was ever released to...
Read more
Latest Posts

She recently admitted to losing a total of 21lbs in weight after going on a diet specifically to squeeze her curves into a dress worn by Marilyn Monroe for the Met Gala.

On Tuesday, Kim Kardashian was seen putting the fruits of her labor on full display as she showed off her taut abs and trim waist, while making a casual appearance exiting her hotel in New York City.

The 41-year-old reality star was pictured with two of her children, three-year-old son Psalm and six-year-old son Saint, both of whom she shares with ex-husband Kanye West along with Chicago, four, and North, nine.

Kim, who is now dating comedian Pete Davidson, kept her bleached blonde locks under a designer baseball cap while dressed down in all-black ensemble.

Looking good! Kim Kardashian shows off her taut abs after 21lb weight loss as she leaves hotel in NYC with children Psalm and Saint

The sighting comes as Kim told People magazine on Wednesday that she sometimes gets’tired’ from all the work adding it is’really really rare’ when she can get even 20 minutes alone in her Hidden Hills, California mansion.

But the star –who is promoting her nine part skincare line SKKN –said there is’beauty in the chaos.’

The Keeping Up With The Kardashians vet said it can be’chaos’ at her home in her $ 60 million mansion.

‘It’s really really rare that I can get in my room and lock the door and say, “I need 20 minutes,”‘ said Kardashian. 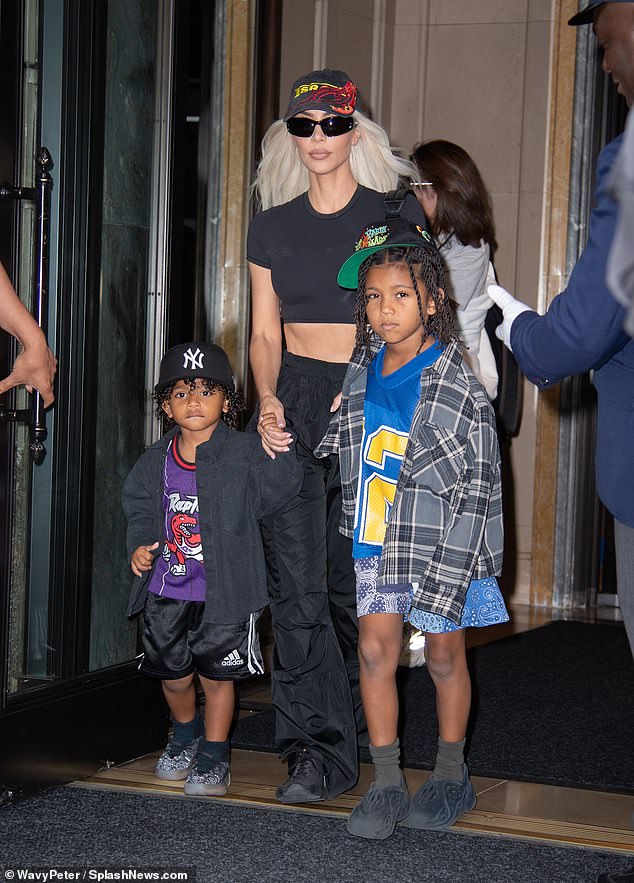 Keeping it casual: Kim, who is now dating comedian Pete Davidson, kept her bleached blonde locks under a designer baseball cap while dressed down in all-black ensemble 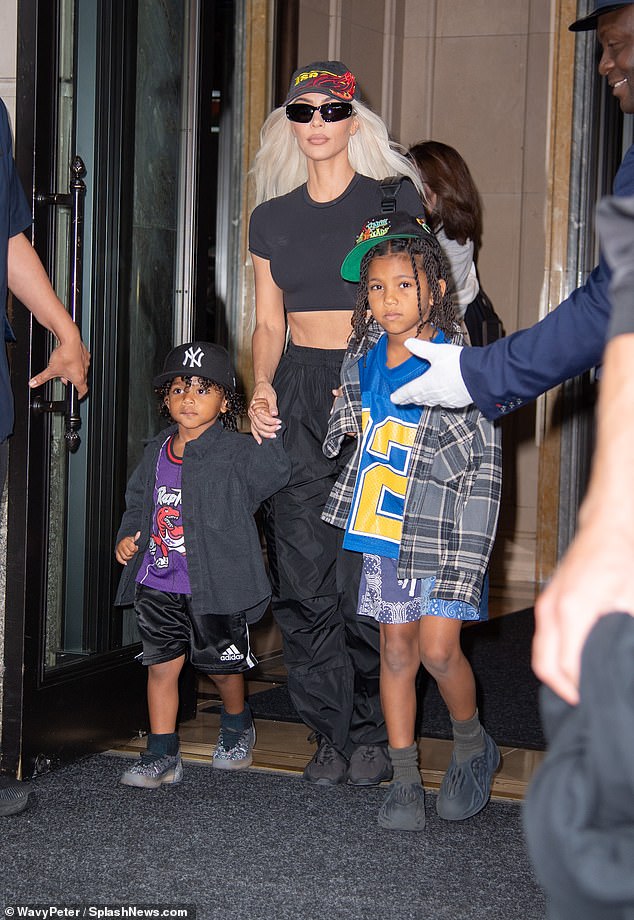 Fam: The 41-year-old reality star was pictured with two of her children, three-year-old son Psalm and six-year-old son Saint, both of whom she shares with ex-husband Kanye

‘Someone always needs me. Even if I’m getting a massage, the kids will try to jump on the table,’ she added.

‘I try to take moments for myself in the morning before everyone gets up. But there is beauty in the chaos!’ She added.

Kim often gets up at 6 am to work out.

And she gets exhausted from being a mom of four, but she never lets her skincare routine slip.

‘There are obviously times when I’m tired, especially being a mom, but I’ve made it a priority. And it doesn’t take as long as you would think!’ She said.

But she would not change her life for anything. 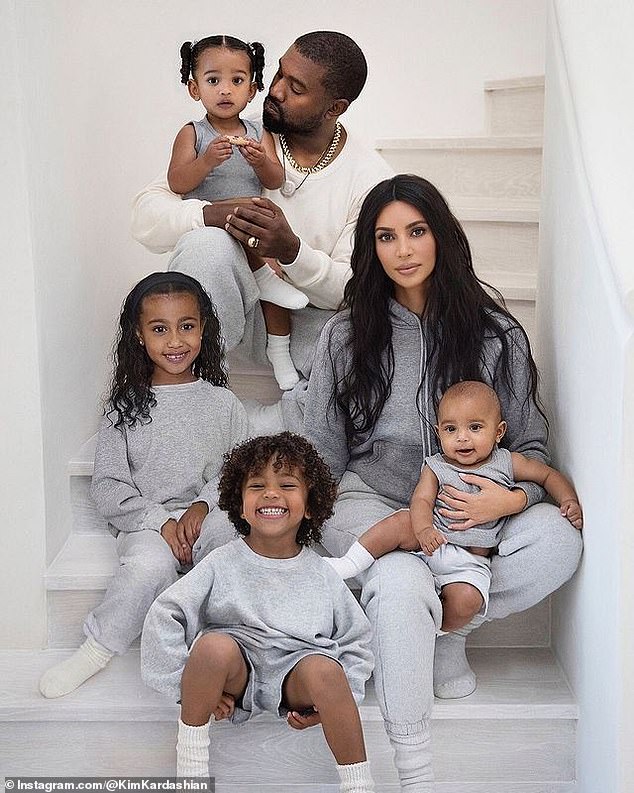 ‘There is nothing I would trade to go back to who I once was,’ she shared.’The wisdom that I have now, I don’t care how young I looked. I am so much happier in my skin now.’

And she also said that her daughter North is a big fan of her new SKKN nine part skincare line.

‘And I tried it on my mom and my grandmother and all of my friends. There is really no age cap.’ 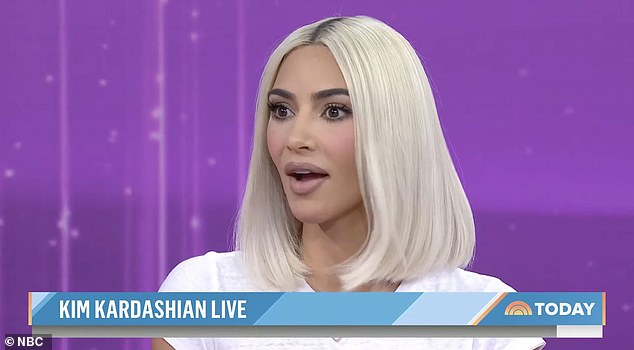 Confession time: Kim recently revealed that she lost a total of 21lbs on an extreme diet

This follows a Tuesday Tonight Show appearance where she scolded her sons Saint and Psalm for being too noisy on the sidelines.

Kardashian was admitting that she had never watched Saturday Night Live before hosting the show in October, when Fallon said,’I’m hearing kids.’

Kim whipped her head towards the backstage area and said,’Guys –guys, can you stop? This is, like, your first time at work with me. Can you please?’

The camera showed both Saint and Psalm with Remi, as Kim added,’My two boys are here and I hear them making so much noise guys, this is your first time at work with me. Don’t mess this up. Come on. ‘

The new issue of People is on newsstands everywhere Friday. 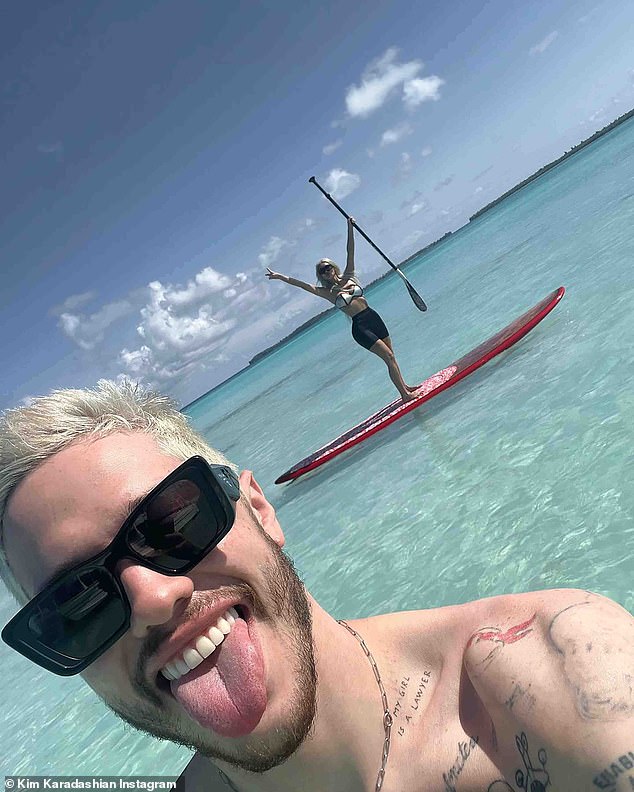 The Nexus Q was such a misguided product that Google decided to pull the plug before the device was ever released to...
Read more

The Nexus Q was such a misguided product that Google decided to pull the plug before the device was ever released to...
Read more
Latest Posts

Cancer: mortality in men falls more than in women

Nigeria's quest to acquire self-sufficiency in sugar production remains Dangote Sugar Refinery Plc's major priority. The company is helping Nigeria towards self-sufficiency in sugar production...
Read more
Manage Cookie Consent
To provide the best experiences, we use technologies like cookies to store and/or access device information. Consenting to these technologies will allow us to process data such as browsing behavior or unique IDs on this site. Not consenting or withdrawing consent, may adversely affect certain features and functions.
Manage options Manage services Manage vendors Read more about these purposes
View preferences
{title} {title} {title}
Go to mobile version